Sorry for such a long lapse in our online presence.  I have recently acquired the job of relaunching this wonderful group.  Our space will be open Saturdays from 2-4pm for cleaning, packaging, and organizing.  Email me at unchainedbooks@riseup.com for the exact address of this space.  Come one, Come all ! Becca 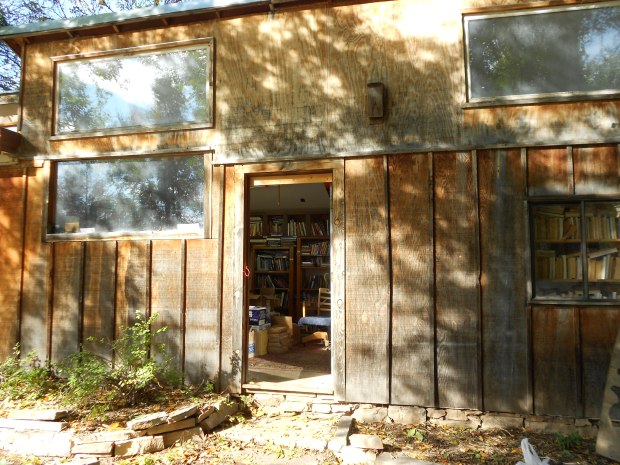 Hi, There will be a book packaging party this Saturday 2/9 from noon to 4pm. There are plenty of requests to fill and books to package so if you haven’t made it our new book space yet- feel free to come and bring a friend! We are located at 135 S. Sunset St. Fort Collins. You can also drop off book donations on Saturday as well.

As Amelia’s next court date approaches, support efforts have started to solidify locally. We’ve been able to have fairly consistent telephone contact with Amelia over the last week. As it stands, Amelia has been moved to solitary confinement within the jail, caged in her cell for 23 hours each day, with one hour for phone calls, recreation, and any sort of co-mingling with other human beings. Amelia has been receiving tons of mail from across the country, and is very appreciative of everyone who has written her. She has promised that as soon as her stamp and envelope package arrives (it was mailed by DABC over 9 days ago), she will write to every single person she has received a letter from.

Denver ABC will be hosting a press conference and rally outside of Denver DA Mitch Morrissey’s office on Wednesday June 8th at 2pm. If you are in the Denver area, your presence would be greatly helpful and appreciated. The address for the DA’s office is 201 W. Colfax, the Webb Building downtown.
Amelia has court again on Thursday June 9th at 8:30 am in courtroom 2100 at the Van Cise Simonet Detention Center at Colfax and Elati downtown. We’re asking supporters to pack the courtroom and make a visible presence outside with banners, signs, etc.

This next hearing will be a hearing on bond (though Amelia has demanded to not be bonded out) and also should be a hearing where the prosecution will present their initial evidence and case to the judge. This could be a hearing where charges would be added or dropped, or where the judge could dismiss the case if the prosecution does not offer enough evidence. We’ll keep our fingers crossed, although we know that the courtroom is the weakest venue for justice that we have.

For folks who want to show support but cannot attend the press conference or the court hearing, postcards and letters demanding her immediate release and the dropping of all charges can be sent to:
Denver DA Mitch Morrissey
201 W Colfax Ave # 801
Denver, CO 80202-5328

Please keep your tone relatively polite and “professional”. Remember that every letter could impact the treatment of Amelia and her case.
If folks write a letter to the DA and want to let us know about it, that would be super helpful. Please email a copy to Denver ABC at denverabc@rocketmail.com as other supporters and friends have already done.
Amelia also would love more mail! She celebrated her 21st birthday in jail on May 31st. Belated cards, letters, and other well wishes would be greatly appreciated. However, please read these mail guidelines before sending anything: http://www.denvergov.org/Portals/327/documents/ALLOWABLE%20MAIL%20ITEMS.pdf
Mail may be sent to:
Amelia Nicol
CD# 0000762401
Denver County Jail
PO Box 1108
Denver, CO 80201

We’ve received several hundred dollars from supporters in Denver and across the country. This money is being spent to pay for phone calls, stamps, and stationary for Amelia to communicate with DABC and other supporters. That money is greatly appreciated, and more will be needed in the coming weeks. We have also started to solicit donations to hire her a different attorney. So, please, keep that monetary support flowing.
Checks and donations can be sent to:
Denver ABC
2727 W. 27th Ave Unit D
Denver, CO 80211.

Checks and money orders should be made out to P&L Printing.

Our comrades over at P&L Printing have also released a new pamphlet, “Denver Fights Back” chronicling the local struggle against police terror. Proceeds from the sale of the pamphlet will go to benefit Amelia. Orders can be placed at: http://plpress.bigcartel.com/
Next week, following Amelia’s hearing, Denver ABC will unveil the next phase of our support campaign. Please check our blog at denverabc.wordpress.com for updates. The blog also provides information on how to sign up for our email announcement list, our twitter feed, and other ways to follow the work of Denver Anarchist Black Cross.

Until then, keep Amelia in your thoughts, and keep up the struggle against predatory social, economic, and political systems!

In love and solidarity,
Your friends at Denver ABC 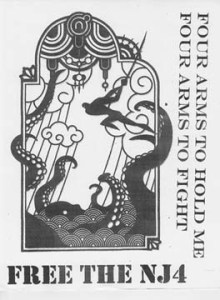 Speaking of writing letters (see previous post), sending letters can be one way to work towards supporting political and other prisoners.  Unchained Books offers a post office box return address for people wishing to not use their home address when writing to imprisoned people.  Please contact us at unchainedbooks@riseup.net if you are interested in utilizing our address for receiving mail from people in prison.

We occasionally highlight particular political prisoners on this blog, and include address information, so that interested folks can send them a note, letter, or card.

Today, we mention two of the New Jersey Four: Patreese Johnson and Renata Hill, both currently imprisoned in New York prisons.  Their mailing addresses are as follows:

If you’d like to write to Renata or Patreese but don’t know what to say, consider the following thoughts from Free the New Jersey 4: “Please send her thoughts, letters, art, poetry, and anything else that might help keep her spirit strong.”

In the summer of 2006, seven young Black lesbians from New Jersey—Patreese Johnson, Renata Hill, Venice Brown, Terrain Dandridge, Chenese Loyal, Lania Daniels, and Khamysha Coates—were hanging out on the pier in New York City’s West Village when Dwayne Buckle, a man selling DVDs on the street, sexually propositioned Patreese. Refusing to take no for an answer, he followed them down the street, insulting and threatening them: “I’ll **** you straight, sweetheart!”

It is important to understand that all seven women knew of another young woman named Sakia Gunn, who had been stabbed to death under very similar circumstances—by a pair of highly aggressive, verbally abusive male strangers. At least some of the seven had known Sakia personally.

During the resulting confrontation, Buckle first spat in Renata’s face and threw his lit cigarette at her, then he yanked another’s hair, pulling her towards him, and then began strangling Renata. A fight broke out, during which Patreese Johnson, 4 feet 11 inches tall and 95 pounds, produced a small knife from her bag to stop Buckle from choking her friend—a knife she carried to protect herself when she came home alone from her late-night job.

Two male onlookers, one of whom had a knife, ran over to physically deal with Buckle in order to help the women. Buckle, who ended up hospitalized for five days with stomach and liver lacerations, initially reported on at least two occasions that the men—not the women—had attacked him. What’s more, Patreese’s knife was never tested for DNA, the men who beat Buckle were never questioned by police, and the whole incident was captured on surveillance video. Yet the women ended up on trial for attempted murder. Dwayne Buckle testified against them.

The media coverage was savage, calling the women such things as a “wolf pack of lesbians.” The pro bono lawyers for the young lesbians would later have to buy the public record of the case since the judge, Edward J. McLaughlin (who openly taunted and expressed contempt for the women in front of the jury all throughout the trial), would not release it. As of late August 2007, the defense team still didn’t have a copy of the security camera video footage. And after the better part of one year spent sitting in jail, four of the seven women were sentenced in June 2007—reportedly by an all-white jury of mostly women—to jail terms ranging from 3 1/2 to 11 years. The oldest of the women was 24, and two of them are mothers of small children.

Periodically updated news regarding prisoner support and related topics appears on the left side of the screen. For more information about the Fort Collins Books-to-Prisoners project, click on the list of pages below.